In May of 2021, the Manistee Community voted to support the MAPS Vision Plan.  With the bond passed, we are now able to execute on our plans for the renovation and expansion of the Kennedy Elementary building, the new middle school gym at MMHS, the demolition of the 1927 high school, and a reimagined future for the Jefferson Elementary property.

We are committed to communicating with you throughout the process.  Updates will be provided on this page as the project progresses. 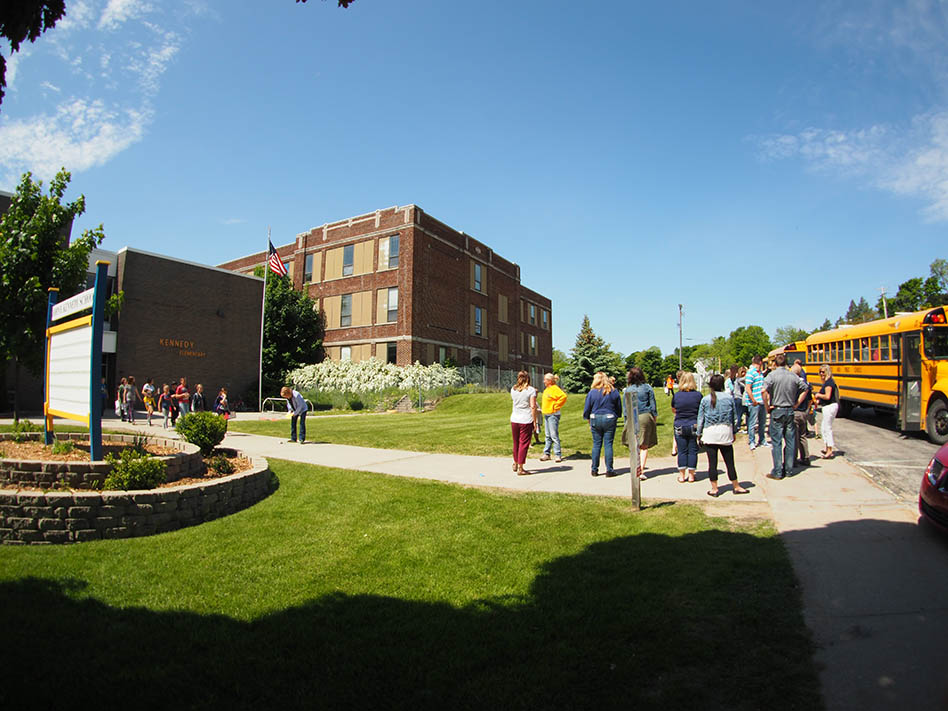 Our community’s recognition of the importance of this bond initiative is greatly appreciated.  Quality educational resources are a vital component to our economic development efforts and this project shows our community’s commitment to our students and the future of education in Manistee.

Want to know more about the project details? Watch our video that gives an overview of the Vision Plan or visit our Vision page to read through the project elements at: Vision for Our Future

Below you will find answers to questions that have been asked of our Superintendent, Ron Stoneman about the MAPS Vision Plan. Have a question about the plan for our district facilities? Please don’t hesitate to submit your questions for Ron following the link below.

There are a lot of variables at the onset of a project of this scale, therefore anything outlined below is subject to change as the project progresses. MAPS will continue to provide updates regarding project status on this website.

Now that the bond has passed, what happens next?

Over the next several months, engineering plans and architectural drawings will be finalized, and a transition plan will be developed to move through the building process.  Work will also continue with the Jefferson Neighborhood Committee to formalize a recommendation for the Board of Education for a future for the Jefferson property once the Kennedy consolidation is complete and the Jefferson Elementary building is removed.  Ideas for this property include: a walking path, practice field/recreation space, a learning garden, and/or single-family housing on qualified portion of property.

In the Vision Plan Community Forum on April 20th, Dan LaMore of Christman Company explained the potential timeline for the project.  A more definitive timeline will emerge as project facilitation begins.

Christman Company and the engineering firm Tower Pinkster will spend the next year or so designing the Kennedy building, which could lead to a spring 2022 project start.  It is really important to accommodate safe and successful operation of the students and staff, so there will be some phasing involved in that building that will need to be investigated more thoroughly.

The hope is to be able to have some of the renovated Kennedy Elementary building occupiable for the 2023 school year, and fully occupied by fall of 2024.

The addition of the gym at MMHS would start in early 2023 and would be ready to be occupied by fall of 2024 as well.

As you will see on our Facilities History timeline, the 1927 high school was proposed for demolition in both the 1997 and 1998 bond proposals, both of which failed. The 1999, bond proposal, which was passed to build the current high school, did not include the removal of the 1927 building.  Again, in 2011 and 2012, bond proposals included the demolition of this building, however neither of those proposals passed.

Because the May 2021 bond passed, the 1927 building is now slated for demolition.  This building will be removed to make room for a 16,000+ addition to the current Kennedy Elementary building once the architectural plans are approved and construction is ready to begin.

The 1927 building will remain in place until the most opportune time to receive the most cost competitive bids for demolition, but no later than Spring of 2023.

The 1927 high school building remains standing today because it houses an elevator in a shared space with Kennedy Elementary that provides accessibility to upper and lower floors for students and staff. The elevator positioned in the connector to Kennedy will remain operational until the new elevator is licensed and functional.

Will the students still be at Kennedy when the building is being renovated?

Onsite construction is currently expected to begin in the spring of 2022.  Until then, all school buildings are expected to remain in operation following the current configuration.

Our priority is planning for safe and successful operations of temporary learning environments for the students and staff during all phases of construction.  We are currently working on a transitional location plan for each grade during each phase of the renovation and expansion of the Kennedy building.  This plan may include some students or selected grade levels occupying Kennedy during construction in a very safe and operational environment within strict compliance with state and local authorities for student and staff safety.  A more detailed plan for these learning environments will be shared just as soon as details can be made available.

When will the Jefferson building be torn down?

Jefferson Elementary will remain fully functional while the Kennedy Elementary building is being renovated.  The demolition can occur once the Kennedy consolidation is complete and students can be relocated.

Work will also continue with the Jefferson Neighborhood Committee to formalize a recommendation for the Board of Education for a future for the Jefferson property once the Kennedy consolidation is complete and the Jefferson Elementary building is removed.  Ideas for this property include: a walking path, practice field/recreation space, a learning garden, and/or single-family housing on qualified portion of property.

When will the students be consolidated to Kennedy?

The aim is to potentially have some of the renovated Kennedy Elementary building occupiable for the 2023 school year, and fully occupied by fall of 2024/winter 2025.

Will the staff have input regarding the project elements?

Representatives from the architectural and engineering firm, Tower Pinkster, will be scheduling staff meetings through the summer months to discuss workflow and design elements of the rooms that serve each grade.  During these meetings, staff members will have an opportunity to share their input with the project designers.  The final plans are expected to be ready late fall of 2021.

The MAPS Board Facilities Committee members are reviewing the district’s need for green space that would include practice fields.  They are also reaching out to local community leaders and recreation organizations for a review of current assets and to discuss potential collaborations that would allow for efficient planning of recreational spaces for the community.

We are also working in parallel on improving the high school practice field which will facilitate more hours of use available.

When will the gym be complete at MMHS?

The addition of the gym at MMHS is planned to begin in early spring of 2022 and expected to be occupied by fall of 2024.

What does the bond process entail?

The bond issuance and Treasury approval processes will begin right away.  The MAPS Board of Education will begin by issuing authorization of the bond sale.  The financial transaction is expected to be presented to the Board in August for final approval and the funds for the project are anticipated to be available beginning in the fall.  The Board will then decide how the funds will be invested while the project is in process.

Will the project go out for bid?

Once the engineering documents are completed by Tower Pinkster, which is anticipated for late fall, the project is handed off to Christman Company to begin the bidding process for all trade contractors.  The Request for Proposal will be publicly advertised and distributed in accordance with Revised Michigan School Code, allowing all qualified contractors to bid on project elements.  There will also be a concurrent outreach effort to create business opportunity for local contractors, also within compliance with Revised Michigan School Code. We anticipate that this process will occur in late fall of 2021.

What can school bond funds be used for?

The Michigan Department of Treasury allows for funds obtained through school bonds to be used for long-term expenditures such as:

Are COVID-19 federal recovery funds available to offset expenses addressed in this bond?

The district administrators are currently working on securing federal relief funds available due to the COVID-19 pandemic.  Those funds are primarily focused on educational programming to address learning loss occurring due to school closures.  Educational programming is not fundable via the proceeds of the bond.

Should recovery funds become available that would be appropriate for use on items, such as mechanical needs, it may be possible to offset some of the project costs.  Approved bond funds can be used in the buildings in which project dollars are allocated for other necessary construction, remodeling, furnishing, or equipment costs.  Any changes would be subject to Board of Education approval.

How has bond refunding impacted our tax rate?

Since the 1999 bond approval, the MAPS District has refinanced the bond debt 3 times, resulting in a decrease in the debt levied (as shown in the chart below).

The most recent effort to reduce the debt came in September of 2020 when the MAPS Board of Education accepted a bid for bond issuance refunding allowing the District to refinance the balance of the 1999 bond ($7,970,000) at an interest rate of .98% (from 4%) which results in a savings over the remainder of the bond life of $1,275,538.

Currently, 2.05 mills is estimated for existing school district debt for the 2021-2022 tax levy based upon the September 2020 refunding, and a millage Increase of 2.65 is proposed for the MAPS Vision Bond, bringing the total mills levied to 4.7.  The millage increase over the 2020-2021 tax year is 2.45 mills from the current levy since the debt levy for the existing debt is projected to decrease by 0.20 mills in the 2020-2021 tax year. 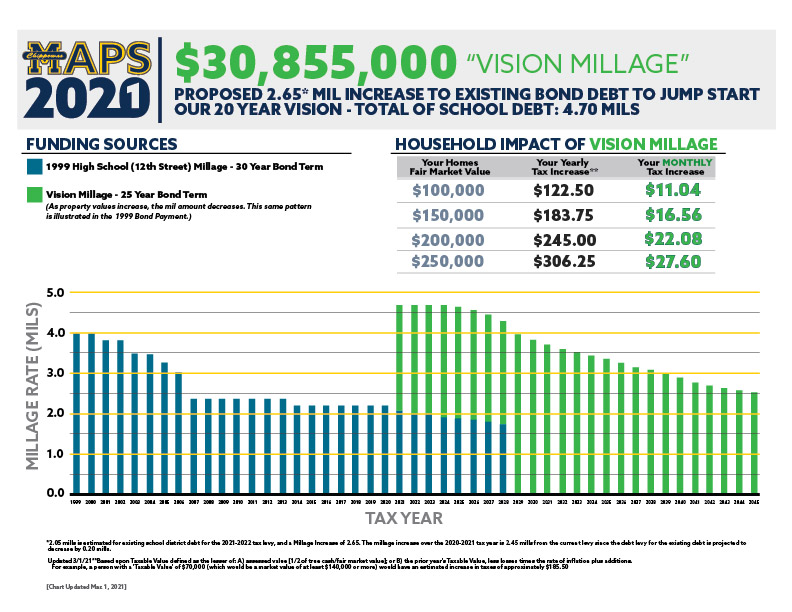 Will this plan allow for growth if our population was to boom?

The school buildings are scaled to ensure adequate space for both current and projected enrollment. The new Kennedy Elementary classroom configurations are designed to accommodate 120 per grade, we are currently averaging 79 to 105 students per elementary grade. If, in the future, our district shows growth in enrollment, the property of both the Kennedy building and the MMHS site are both able to accommodate for expansion on all grade levels.

How was the bond proposal plan developed?

The process of establishing a future vision for the Manistee Area Public School district began in the fall of 2016, with an effort to understand both an internal and external perspectives on the needs of our district. From this, it was determined that the district needed a scaled facilities plan that would better meet the physical and financial needs of our district over the next 20 years.

MAPS is focused on optimizing student success, is paying attention to the input from our internal and external stakeholders, and has deployed improvement strategies many areas:

Was daycare considered in the Vision Plan?

This proposed plan would relocate MAPS Pre-School and the Great Start Learning Program from Madison to the renovated Kennedy building. MAPS offers Pre-K programming for children ages 3 to 5. Interest has been expressed for our district to expand services for children 0 to 3. The programming and expense for such a consideration is a major undertaking and requires collaborative efforts of many community organizations to determine the best course of action. MAPS is committed to having these conversations, better understanding the needs of our community, and becoming a partner in a solution to serve young families.

How do our class sizes compare with other districts in our county?

MAPS district averages a 20:1 student to teacher ratio. The other districts within the Manistee Intermediate School District are as follows: